Teaching about the Holocaust

In the school where I teach, we read Night, Elie Wiesel’s first memoir of the Holocaust. For me, reading Night and having my students learn about the Holocaust amounts to a mission.  Other teachers, though, find it a pain, a bother. They don’t understand all of the terms, which, I guess, means that they don’t want to learn concepts that are alien to them. I’m pretty sure they won’t be excommunicated from any church which they don’t attend if they learn what Shabbos means or what Kabbalah refers to. It seems that they want to stick to analyzing characters in a neat way as opposed to this small plunk of vicious reality that cannot be analyzed for character development.

It is so utterly wrong that the one Jewish member on the team (or the one who identifies as Jewish) is the one who finds true purpose in this unit. After all, do I teach because children need to know how to identify a metaphor, or do I teach because children need the tools to think and express themselves? It is so very wrong that people think, apparently, that since it didn’t happen to their people then they don’t need to relate to it. Or, worse yet, perhaps because it’s too much for them—too depressing, too horrifying, too outside of any comfort zone—they rush through it to fulfill a requirement but no more.

Generally, there is a research component to this unit. I have found it difficult to oversee this project because most kids want to find a single website that will give them answers to the questions they need to consider, yet I, I can’t help it, I want them to take it  more seriously than the means to a grade. So this year I will try a different way to reach inside those teen walls of indifference. This year each student will be assigned an event or place, and then research it and—this is the change—read original source material from people who lived through “their” event. I’m hoping that these personal stories will bridge the gap between doing schoolwork and connecting to history.

At the same time, other teachers have decided that this year they are going to focus on German propaganda. They will focus on how the Nazis led the Germans to follow them, to believe them, to be captivated by their tales of how lovely it is to be us, Aryans, and how hateful it is to be them, the Jews, or anyone who does not look as we say they should or behave as we say they should or believe what we say they should. And that is good, but it feels wrong. Maybe they are right, since our focus is supposed to be on language and that, really, is what we teach. But really, doesn’t this make the students focus on the poor Germans who were manipulated by the evil Nazis. Where in this focus are the victims—the people who were defiled, tortured, shot, gassed by those who believed and those who were too cowardly to not believe? Where is space for the victims of the “mislead”? Will they learn that excuses are more powerful than actions?

I tell myself that any learning and thinking about what happened during the Holocaust is positive; that I should not think that there is anything wrong with their focus. And yet it makes me uncomfortable. Does it come down to these teachers not being Jewish and so not feeling, intrinsically, the honor/importance that they have been given to transmit this lesson to a generation of citizens of the world? Maybe I’m wrong. But it doesn’t feel that way.

How are we to ever get to “never again”—that violent acting out of group hatred or fear—if our teachers can’t put themselves in another person’s shoes, even if those shoes have been preserved in monstrous piles never to be forgotten? 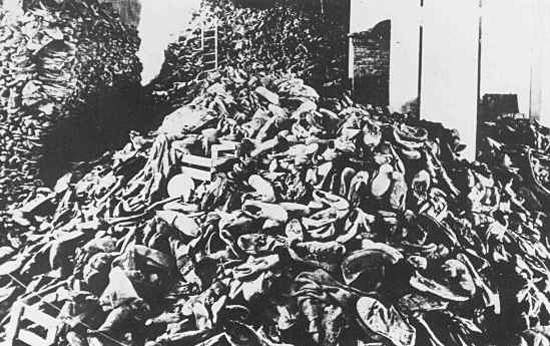 I'm not Jewish but I did work in a synagogue for a while, so I am familiar with the terminology regarding the Holocaust. I know there is a great deal about it that I don't know/understand.

I was talking to my mother about her upcoming trip to see me and we discussed visiting the Holocaust Museum here and my mother told me that she doesn't want to do that because there is no point in seeing all of that horror. I conjecture that focusing on propaganda allows your fellow teachers to teach about the Holocaust without confronting the reality that is was absolutely horrific. Indeed, I think that the kids will learn about the "poor Germans being manipulated" but won't learn a darn thing about the REAL story. And I don't think you CAN get to "never again" without confronting the reality of what HAS BEEN.

So, I'd want my student in your class. This isn't something that should be wrapped in ribbons and bows and made pretty & palatable. You are on the right track, I'm sad that the others are not.

Thanks for your feedback, Ms.Darkstar. What you say certainly makes sense: focusing on propoganda makes it into another lesson instead of THE lesson. You've also decided my mind to definitely do a lesson for Martin Luther King Jr. Day tomorrow and Wednesday, and not skip it.

Thank you for writing this. I am glad to know you are out there -- caring. Also, I loved your personal day story. I could relate to it Very Directly. I am glad to have found your blog.

Thank you, Charlotte, for reading and commenting--and becoming a new reader. I appreciate your comments.

I don't think it should be an either/or lesson. The Holocaust should be taught, and the propaganda angle should have its place in addition.

Out of curiousity, I asked my son what his exposure had been in school so far to the Holocaust. In fifth grade, they read Number the Stars. In eighth grade, they read Night and also the Diary of Anne Frank. Where he hasn't studied it, interestingly enough, has been in any of his history classes. Maybe that's yet to come?

Here, they learn about the Holocaust in 10th grade, a bit late. And the reading of Anne Frank's Diary, now with all the testing that needs to be done, they read an abridged version of a play based on the book. Unbelievable how much damage teaching to the test has had.

That is so true. How sad.

When my son's Reading class was studying about Anne Frank, they assigned parts and spent several days reading the parts aloud in class. I thought it seemed like a very effective way to get the kids to really think about what was going on. They also watched the movie.

Now, this was at a charter school with a longer school day, which may be why they had the time to spend.

It's a pity that so much is lost in the quest for teaching to the test.

Teaching to the test. Can't wait for the pendulum will swing back the other way--to more openness and creativity. I wonder, though, if it will. What with the push, too, for technology in the classroom (enriching Bill Gates or the students?), I wonder if we can ever get to mind over matter?