Home Archives Profile Subscribe
What Do I Deserve?
Thinking about Tongues 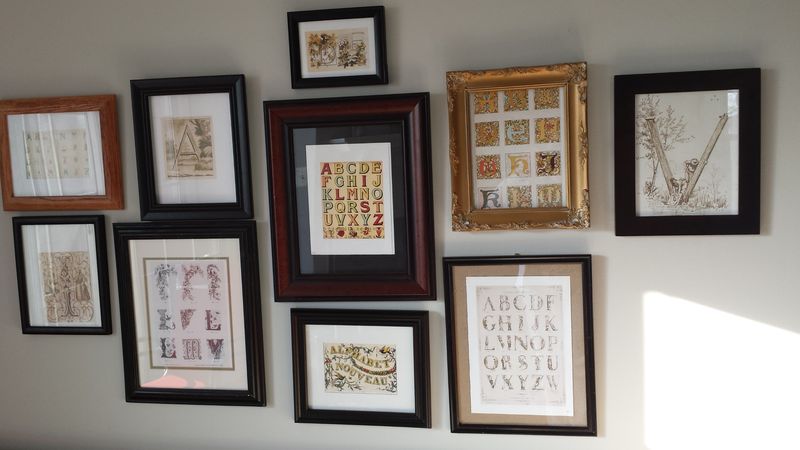 For thirty years I have been afraid to hang a picture on a wall. Over those thirty years I have lived in nine homes, but only in the first apartment can I remember hanging pictures. I cannot blame deposit-withholding landlords, since I was an owner in half of those homes, and in one that I rented I painted the walls of one room cranberry and raspberry.

A threesome of fears prevented my putting hammer to wall: picking the wrong spot, leaving a nail hole, positioning pictures crooked. But as an avowed Type Z slacker to the Type A perfectionist, I can pin the initial blame behind those fears on my mother and my ex-husband. My mother would brag about how good she was at hanging pictures and making perfect picture groupings. It was her specialty, neighbors called her in for consultations. She made it into something difficult, something that only some people could do successfully. My ex-husband, who intimidated me in so many ways, seemed intent on showcasing my inadequacies in so many ways and hanging pictures that were at odd angles to each other was, I knew, waiting in the wings, so why give him ammunition if I didn’t need to? Besides, I told myself, bare walls aren’t so bad.

A year ago, I bought my apartment, and at the end of May my younger daughter and I moved in. She immediately did her collage thing of taping magazine pictures of beautiful girls and boys on her walls, but me, I leaned pictures against the wall on the mantel, in a picture stand on a chest, and on the bathroom floor (it’s a big bathroom), but hang a picture, not meek me.

A month ago, I used velcro-like hangers (selling points: no nails and easy to remove) to hang three pictures in my bedroom, a safe place where no one (unfortunately) would see my picture-hanging inadequacies. Those hangers had been in my car for months.

Then, two weeks ago I burst into a moment of to hell with it, and went on a picture hanging binge that involved hanging eighteen pictures in the living room, the entrance space, and the bathroom, and then yesterday I hung another thirteen on the wall opposite my kitchen. Many of the frames are crooked. Some of the frames need to be repositioned because they are either too close or too far from their neighbors. Some of the pictures inside the frames are crooked, and need moulding and matting. And I’m not sure if the groupings are harmonious. But it is glorious to have pictures on the wall. I remember places I have been and think of places I would like to go, I see my smiling daughters and my father on vacation. I see me.

Perhaps it was not the fear of failure that prevented me from hanging pictures, perhaps it was that I didn’t know what I wanted to represent me. It was not about having a good eye or finesse with a ruler (hah), but it was about stating who I am for all to see. Not surprisingly, now, when I walk around my apartment, I am comforted. No wonder that I told a friend today that I finally feel at home: my space reflects back my mind’s eye, and it is not blank.