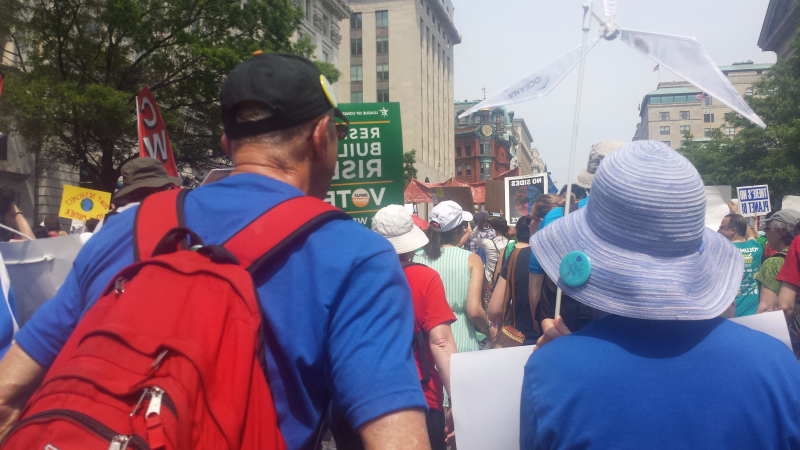 So insightful, humorous, painful, so

The moment that transcended

Sharpies, poster board, and paint

Conviction is a sound.

The boom and cry that is the voice

That connects each heart.

It came up the street like a movement of air

Pulsing through the thousands.

Connecting each to each.

The beat of Mother Earth in our souls.

We were told to sit and

Make the sound of a beating heart.

But we had already lived it through our howl

That flowed like a river from the Capitol to

The White House (empty, he could never

Before we lived it through our hands.

We Protectors of Justice,

Guardians of the Future

Keepers of the Faith

Strugglers for Our Home

Given a moment of beauty,

within the connective web

That unites our hearts with the wind.

Commitment is a sound: 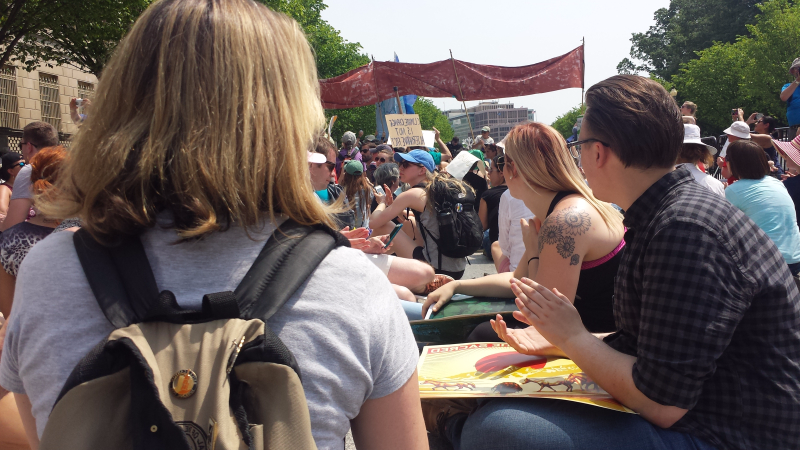 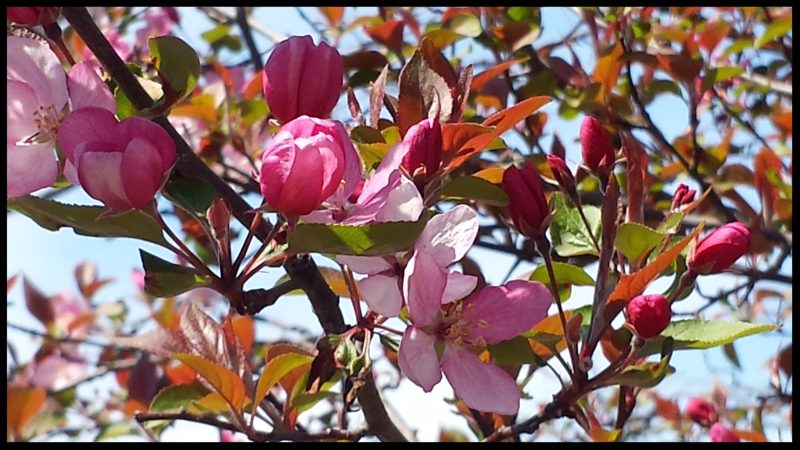 People have been wondering why white women voted for t-boy, as have I. Until I started thinking about being teased growing up. Then it sort-of kind-of made some sense: this voting for a bully thing.

I lived in Queens in a fairly typical six-story, ten apartments per floor, red brick building with an identical building across a joint parking lot, making it a little enclave. Between the two buildings there was a large playground/play area. This was my immediate neighborhood and the kids who lived in the two buildings, until we were old enough not to depend on proximity for friendships, were the kids I hung out with. These included two girls a year older than me, two girls a year younger than me, and about the same number and age range of boys.

Memories of my childhood include name-calling about how ugly I was and not being chosen for teams. These two, shall I go out on a limb here, were linked. The teasing and the non-choosing were done by the boys, while the girls, especially the two younger girls, acted as if they didn’t see or hear a thing, and took their places on the teams they had been picked for. They were the cute girls. The two older girls generally acted as if they were too old to play games, besides they were too tough to be teased, and their older brothers and parents were far more intimidating than mine. Which left me as the outlet for the bullies. Lucky me!

For years my mind would revisit a scene where a pack of those boys on their bikes turned to me and told me that I couldn’t follow them, that I wasn’t wanted. Another scene that replays is being ignored when choosing teams on the improvised baseball field and my desperate retreat straight to my bedroom in our first floor apartment (where I could still see and hear them).

When I was going through my divorce, I used to note how cruel my daughters could be to me, siding with their father against me. But what I finally understood was that they needed to do that to preserve their relationship with him. They saw what he did to someone who he no longer loved; they saw and heard the cruelty of his actions and words toward me. They knew, in the way we know things without being cognizant of them, that I would never seal off my love from them and treat them as unwanted outsiders, as he had done to me. Siding with him was the only way they had of trying to keep the love of their father. What a choice, even if an unknowing one.

Perhaps my friends didn’t react so that they could preserve their status as valued and protected girls. Perhaps that is what some of the white women who voted for t-boy and his ilk, did. They get to remain within that protective circle, even if it means being demeaned and demeaning themselves. For them, being protected, even by their abusers (for what else is a person who devalues you?), is safer than being on their own, with no protection. Research on abuse shows that it takes a woman seven times of leaving to finally leave her abuser. It’s hard to break a cycle of abuse; it’s hard to create one’s own sense and space of safety and security.

My friends stayed outside to play, while I retreated to my room.

I wonder now who was really safer?

Do we really wonder what happens to women who are deferential, who allow themselves to be physically comforted but morally contorted?

We must defeat those who will diminish our independence by recognizing that some modes of self-preservation do not protect the core, and that one’s moral fiber can become thickly woven with dissatisfactions and anger, rather than fulfillment and purpose. We need to recognize how we can twist ourselves to appease the internal distress that comes when we act against ourselves. And act against ourselves we do when we join with those who debase a person’s essence.

All of us—women and men—need to recognize the place within that concedes, appeases, and fears. We must crowd out those hesitations and use that internal struggle to learn to vie against those who seek to hurt or weaken any of us. Strength is not a show of force; strength is overcoming fear so that we can act in compassion for me, for you, for us all. 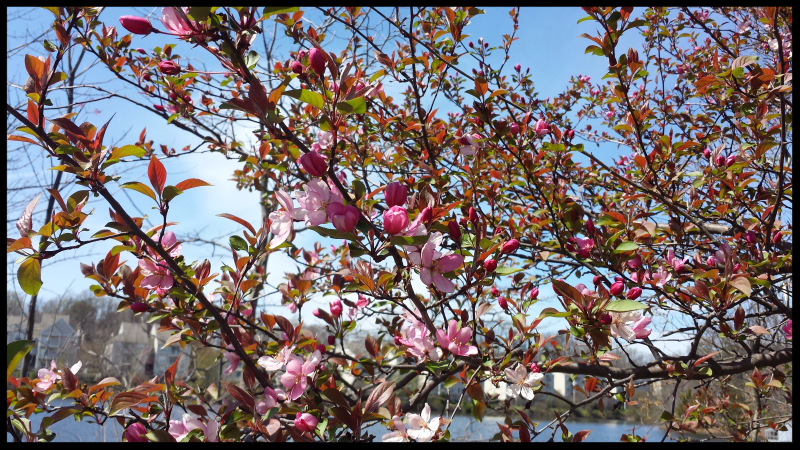 Spring blossoms: the beauty of more 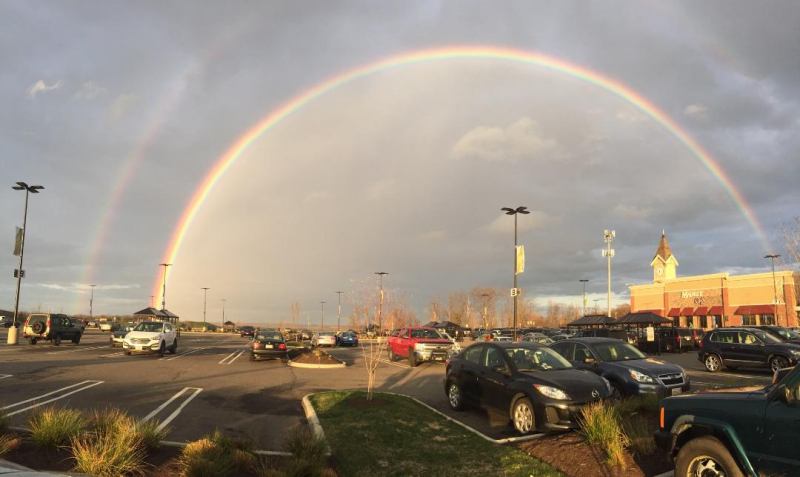 A meal without a woman.

Who knew that’s a thing?

Grabbing them by the p*ssy.

Who knew it was ok?

It’s all too much for me. I want to be snarky and witty, but I’m too angry for that.

Apparently, the non-eating with a woman alone thing is standard practice with Evangelicals and other Conservatives, which, I guess, would be merely mind-boggling if those guys weren’t directing the government, as in instituting policies that affect women who they refuse to see as their equals. (Unless it's equal to temptation.) They subscribe to the “protect them for they’re too weak” and “protect us for we’re too weak” outlook of gender. It’s clear that Thing 1 and Thing 2 have absolutely no respect for approximately 50% of the population. It’s hard to believe that minds don’t progress. Men and women who believe in Patriarchy have taken the reins, and are using them to undermine and belittle those of us who have no patience any more for their War on Women.

These guys are simply a suited version of the guys in a construction site who think it’s grand to grade and degrade women as they walk by. These men may not be catcalling, but they sure as hell don’t have a more sophisticated outlook on women. Maybe that’s how we have to perceive them: a bunch of immature bullies. Gosh, isn’t it fun to tell a woman what she can do with her body.

But we know, in spite of their hold, that the world was not set in motion to continually stroke men’s egos.

Clearly, there is no talking to people who are incapable of seeing a woman as anything but a giant apple on a tree. And you know what, their presence frustrates, it does not intimidate. We are still on the march.

This afternoon I went to a meeting of the organizers of local groups who are actively engaged in Virginia 2017 elections and beyond. There were about 40 women and 8 men present. These are not women who are waiting for someone else to take the reins and make decisions. These are not women who are asking for help from a party or an organization. These are women who are creating and redefining themselves—and our world. Self-preservation is a powerful motivating tool. We are in it, forming whatever it is, because it is not futile to fight for the future. The only thing that is futile is defeat and there is no way that any of us will acquiesce to misogyny.