The other day a friend sent a pitying text concerned that I don’t have anything to do on Christmas. She failed to remember that not everyone celebrates Christmas. In the mad crush to bake cookies, buy gifts, regift gifts, model ugly sweaters, decorate trees, some people forget that the holiday is based on (as the carol sung at my school’s winter celebration melodiously stated) the birth of the savior. Some of us who are not Christians and have not been tempted by the tinsel, do remember that.

This is not my holiday.

Unlike an Indian friend who is able to enjoy her Hindu holidays and seamlessly let Santa in for her nieces and nephews, I have not been able to blend holidays. And unlike friends and family who are in mixed religion relationships, for me Christmas does not represent mutual respect for each other’s traditions. Sure, we Jews have our tradition of going to the movies and eating Chinese food, but these fill a day when so much is closed more than anything else.

Since this is the first winter break in a while that I haven’t visited one of my daughters, it does seem like a bleaker season than usual. But how would taking on something that doesn’t relate to me ease my aloneness?

Though alone, my life is not still.

The quiet experiences of self are not an alternative, they are the basis, the breath, the source. I have learned (am learning) that external experiences that bring smiles and memories complement, supplement, support. I do not need to be entertained endlessly to be fulfilled. I cannot talk if there are no pauses.

The answer is not to place my happiness on the transient, the substitute. No, it is to accept and grow. It is also to acknowledge that my daughters are independent women living their lives and I cannot demand inclusion. I would never want resentful traditions. A few years ago, I visited older daughter in Palm Springs two years in a row. The first year we cooked all the traditional foods. The next year they let me bake an apple pie to go with the non-standard fare. Perhaps the traditions that thrive for us are those that we create—we want—and not those of external conventions.

Tradition, as is so eloquently, though tragically, shown in The Fiddler on the Roof, is to accept that the past will neither dictate the present nor the future.

Yesterday, while I did a 5k around my neighborhood, I came up with an idea for a book project. I came home and started doing the research, and then I had dinner of homemade Chinese food and watched Roma on Netflix (highly recommended). It was a fulfilling day.

When so many people are off doing their family things, it is not that I want to join in, it is that I need to remember my joys. Which makes me think of Wordsworth’s powerful poem of remembrance, “I Wandered Lonely as a Cloud.”

I wandered lonely as a cloud

That floats on high o'er vales and hills,

When all at once I saw a crowd,

A host, of golden daffodils;

Beside the lake, beneath the trees,

Fluttering and dancing in the breeze.

Continuous as the stars that shine

And twinkle on the milky way,

They stretched in never-ending line

Along the margin of a bay:

Ten thousand saw I at a glance,

Tossing their heads in sprightly dance.

The waves beside them danced; but they

Out-did the sparkling waves in glee:

A poet could not but be gay,

In such a jocund company:

What wealth the show to me had brought:

For oft, when on my couch I lie

In vacant or in pensive mood,

They flash upon that inward eye

Which is the bliss of solitude;

And then my heart with pleasure fills,

And dances with the daffodils.

A poetic gift to those who celebrate Christmas and those who don’t. May there be beauty in your every day, lived and recalled, now and in the future. 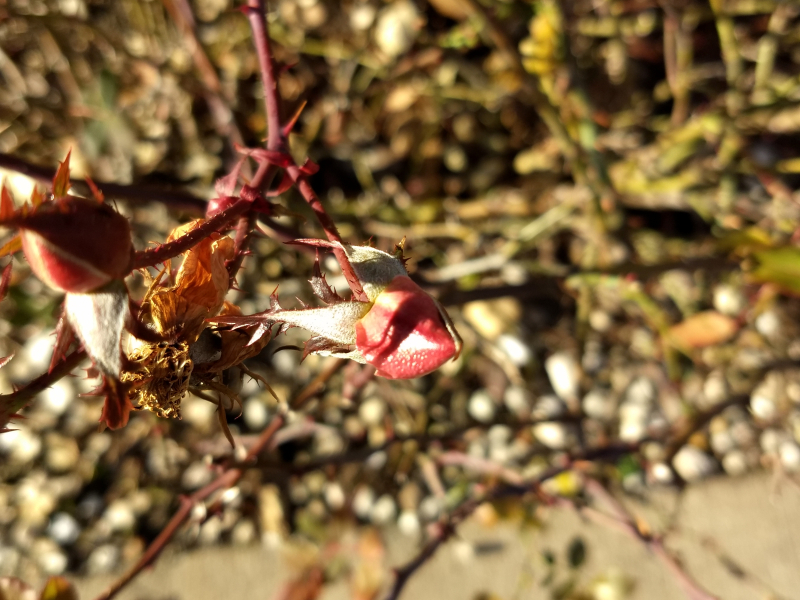 Roses ready to bloom in the winter