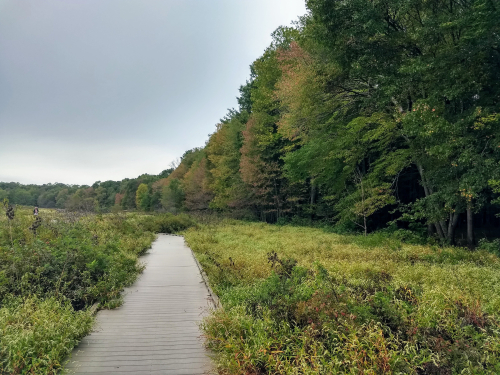 This morning I walked at Huntley Meadows Park (5,063 steps).

The dried plants and coloring trees attest that autumn has arrived.

It was early, so the camera birders were out

with their tripods and huge lenses to capture birds

in flight, at rest, at prey.

I am not a birder: there were gray birds (herons?) and white birds (egrets?).

I have seen them there before; they are what I expect to see. 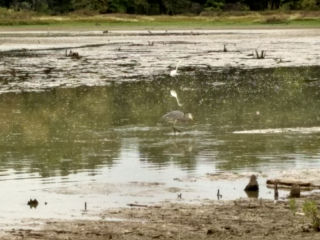 As they focused and hoped for the photography gods, as one woman said,

I saw a heron attack and spear a fish in its beak:

that moment is captured in my mind. After it happened

the photographers took, I assume, close-ups of the fish in its beak.

Their pictures are surely better than mine taken with my phone,

but I saw the moment of action that defines instinct, not thought.

My father was a birder. He would know their names.

My mother and I often go birding when we are together.

It will be ten years in December.

Yesterday, I spoke with a friend. Two of her friends have cancer.

It is upsetting, to be sure, to anticipate those losses.

But in trying to keep herself upbeat, she spoke about

and think that people can fault my father for dying

within two months of his diagnosis.

There are so many things we cannot control.

It is not acquiescence, it is reality.

Today I did not see many birds or turtles, as I usually do.

Instead, there were frogs, half hidden in the muck,

eyeing the world that passed by. Delighted,

only I took pictures of them.

Afterwards, I went for latte at Grounded Coffee.

I went to be amongst a flock. I did not want to separate.

Perhaps I am the frog, barely visible at my table, watching

The couples, the families, the children (one boy in an octopus shirt)

even myself, as we live this moment.

Posted at 11:56 AM in Poetry, Relationships, Solitude, Thoughts | Permalink | Comments (0)