Around the Bonfire with Work Campers 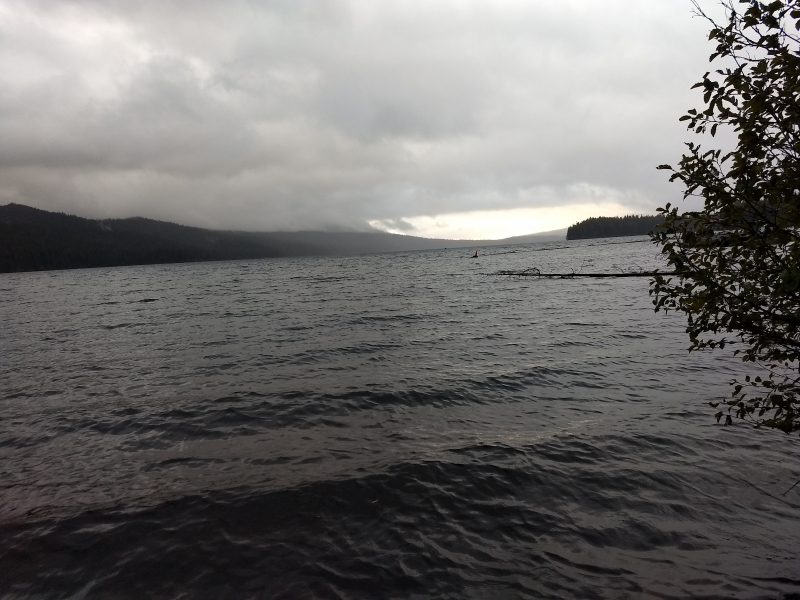 For the past few nights, I sat around the bonfire (the Forest Service has permitted them again in this area after two days of soaking rain) with some of my daughter’s colleagues and, now that they’re back, YEAH, my daughter and her boyfriend. Some of her colleagues live in their RVs, while those who will winter here have moved from their RVs into employee cabins, like the one I’m in now. This is a completely different world from what I’m used to with neighborhoods of apartment buildings, townhouses, and private homes. I like the difference: seeing that differences exist, that possibilities expand with and beyond those differences.

I don’t envision myself living in an RV in the future, but I do like the idea of not always being tied to a specific place. Without realizing it, though, I’ve done the first step in that direction, with no longer having my own home and living with my mother, and now travelling to visit my daughters. In one place I have my own bedroom and in the other two I have a couch in the living room. At first it was uncomfortable, disorienting, not having an entire home to myself, but I realize now that I’m getting used to a whittled down space of my own. What I need to figure out is what I need from my own space. Though, I think the issue is less about the amount of space than the quality: a space where I can be completely alone.

But back to the RVers and their need of space. Some of their RVs are huge and some are relatively small. It seems that the decision of RV size is both monetary and personal; they are each figuring out how much space they need to feel comfortable, for living and hauling, to feel that it is home. From what they have said, it seems that each time they switch to a different RV, they are getting closer to realizing how much space and stuff, they need. There seems to be the continual search for their Goldilocks-sized RV.

Getting the right size does seem to be a preoccupation until reaching the correct balance in RV size and vehicle hauling strength. People in RVs are not indifferent to having a home, they may be more involved with it than people in permanent homes.

The people who work here are called work campers (or workampers) and they range in age and experience, where one woman is 21 and in a silent, observational stage of life, and another is in her 80s and talks about her adventures growing up in the rural Northwest. They spend a season (summer or winter) or more at one site (usually some sort of lodging or camping site) and then move on to another site. The work is generally in housekeeping, maintenance, and/or at an on-site store or restaurant. Unfortunately, though not surprisingly, the jobs are gendered with the women in housekeeping and the men in maintenance.

Being a teacher, routine had been such a big part of life. You have your set schedule of classes, group of students, calendar of days on and off, classroom (of course, there was that one year of teaching from home…), group of colleagues. Within each day there was certainly variety, but it was within generally set variables, and most of us even taught the same things year after year. So, it’s fascinating for me to see lives being lived outside of a box.

The jobs themselves are all similar from one site to another (they are not the draw), but what does vary are the people you work with, and, the key, the change of place, the often dramatic change of scenery. It makes me wonder what impact change of place can make on a person. For my entire 16-year teaching career (not counting after-school Hebrew classes before that), I taught at the same school. I wonder what would have happened if I hadn’t played safe and tried teaching at another school or even schools? One reason that I stayed there is that I didn’t trust myself and my skills as a teacher to go to a different school. Among the advantages of staying at the same school meant that I developed strong friendships with some colleagues, but maybe I would have made more friends by not being in just one school. And I might have realized that I’m a better teacher than I thought, or I would have pushed myself to improve.

The work itself had been the focus for my entire career, from when I was a technical writer to when I was a creative writing teacher. I wonder if I can do the switch, as the workampers have done, and focus on what I want to get out of life for myself and not just what I can give and produce. Can I value myself as a person enough to stop assessing my worth? Can I put myself in different situations to see who I am as a person, to grow into other aspects of self? How does space protect me and how much does it prevent me from finding out?

For information on work camping, the Cook Works site is a good place to start since it gives lots of information about jobs across the country.

Laura, I can see the appeal of living independently, off the grid--no worries about cutting the lawn and dusting the knick knacks. I appreciate that people have the option of working and living this way. And I see the appeal of paring one's life down to the essentials and objects that have special significance. (I know too well how our stuff can weigh us down.) But I recognize that it's a hard life, not for the faint of heart, as illustrated so well in Nomadland.

As for your teaching experiences at the one school, you might have moved on to another school only to find that you missed your former school greatly. Or maybe a different school would just have been that--different. Hard to know what the road not taken looks like.

I envy you, having pared your life down to the essentials. So freeing. What an adventurous transition from teaching!

It does feel good that this move has included seeing into the moves that others have made. Feels good to jump into change--adventure!

Thanks for your positive take on those paths in the snow taken and not taken. I do the same thing with other people. Clearly there's a reason we connected.