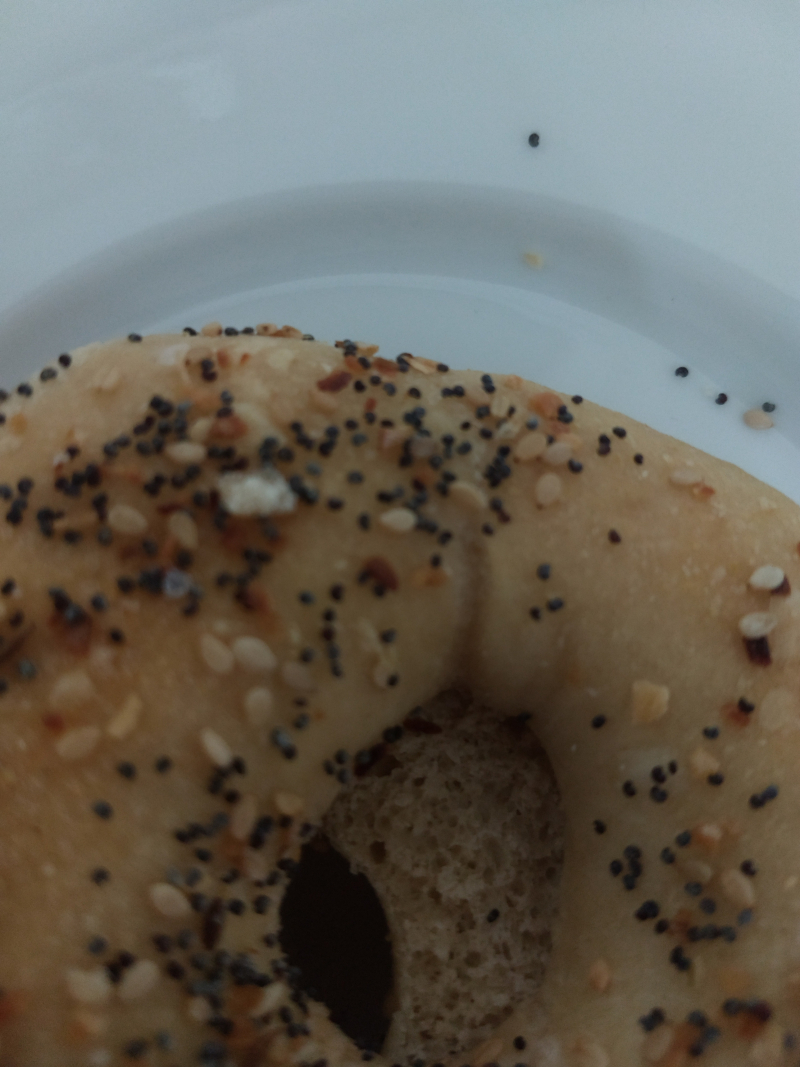 I love everything bagels. If there isn’t an everything bagel in the house, I will often sprinkle everything bagel spice mix onto a slice of buttered toast. Two key components of the spice mix are the stealth seeds, like beige sesame, and the brazen seeds, like pop-of-color poppy. If you’ve eaten an everything bagel, then you—or the person you’re talking to—have probably found a poppy seed lurking between your teeth. (A silver lining of the pandemic mask-wearing is that you can go a day with poppy seeds ensconced between your teeth and no one would even know.) So, it seems likely, doesn’t it, that a seed or two would fall, missing mouth, hand, plate, napkin—all the things that are designed to catch seeds—and drop onto clothing, chair, floor.

It is not the end of the world.

But it is if you are one of those people who notice these things, who care about them, who wonder what people would say about you if they were to come to your house and scrutinize your floor. And if you look quickly, those seeds might look like bugs. Yes, this is the end of the world.

I, though, am amongst the don’t notice/don’t care people. This could be because I generally don’t wear my glasses in the house and so I don’t even notice that I have caused seeds to drop, leaving a clear sign that “Laura has eaten here.” But probably it is because I am not rankled if something is out of place (which means not precisely placed where previously positioned).

What to do when these two types live together? The answer may be that the living arrangements won’t last long. An alternative might include compromise: there would be a slight looking away by one coupled with a more intense concern about droppage from the other.

The way it is working out in my living arrangement (where I currently live with my mother as my first-stop in my retirement journey) is that the other day a dustbuster was casually brandished by my mother after I finished my breakfast bagel. Someone mentioned the phrase “passive aggressive” recently. I thought that it suited, but I also thought that we cannot be defeated by an errant poppy seed.

I don’t know what she was thinking about as she vacuumed up seeds from her new beige floor and the chairs on which I have sat at breakfast time.

I do know what I was thinking: it was anger that she was picking up after me, that she couldn’t speak to me. It is frustrating living with someone with whom I can’t really speak.

After my outburst, where I expressed my frustration and feelings in not the most elegant manner possible, and after my swim, and after she returned from her three-hour supermarket shopping trip, I tried to engage her in an “I” conversation. I told her how I feel. I thought it might clear the air now and into the future. She told me “You are wrong. You are not thinking right.”

I hadn’t realized until that moment that to have a successful “I conversation,” the other person needs to understand that we are stepping back from accusations.

At that moment, I realized she is right. I am expecting her to be someone who she is not and, perhaps, I expected her to change. I am wrong. She does not need to change; she will not change. I need to adjust, aware that this is temporary and that she is getting close to 90.

I am reminded of a friend who lives with her mother-in-law, in addition to her husband, thankfully. The first piece of advice she gave me when I moved in with my mother was to be patient. Patience, I have learned, is like an everything bagel. It is not just one thing. It is how you react to each situation. It is how you don’t react in others. It is how you act toward the other. It is how you reason with yourself. It is how you enjoy the experience as a whole. It is a lot harder than I thought.

Laura, the first time I experienced an everything bagel, I was in love. Recently I discovered everything hummus, which is not too bad. To be so concerned with an errant seed or two--oh, boy. That's a lot. I think about our situation here--we have pets, so there's always detritus being carried into the house on paws (as well as shoes)--an errant poppy seed or two would never even merit notice. It sounds like your mother's apartment is compact with light colors so that anything out of place is immediately noticed. I honestly don't know how any human person is able to eat an everything bagel without dropping a seed or two, though.

This makes me think about my situation with my mother-in-law and how she has never been a go-with-the-flow type of person. She's pretty much confined to her bedroom suite due to her health, but she wants everything within her suite to be kept in place exactly the way she wants it. Maybe it comes with age, this needing everything to be just so, able to be controlled at an age when a person is losing control of different aspects of their life? Something that helps me is to remind myself that I'm going to go to bed, and the next day is a new day. New start.

Margaret,
Control is such a good point. Perhaps I should see her attention to errant poppy seeds as a positive thing that she notices and cares--and her eyesight is still sharp.

A new start each day. A cleanish slate. Breathe in and breathe out. Thanks.

It helps me, but that is not to say there aren't times when I feel like I want to pack a bag and run away for a while. Fortunately, those spells don't last. A walk does wonders for re-framing and re-focusing.

(Maybe you'll have to get one of those lobster bibs for when you have your everything bagels.) ;)

A bagel bib! I'll be on Shark Tank with it for sure.

What's great about the weather here is that I can escape to the pool just about every day.