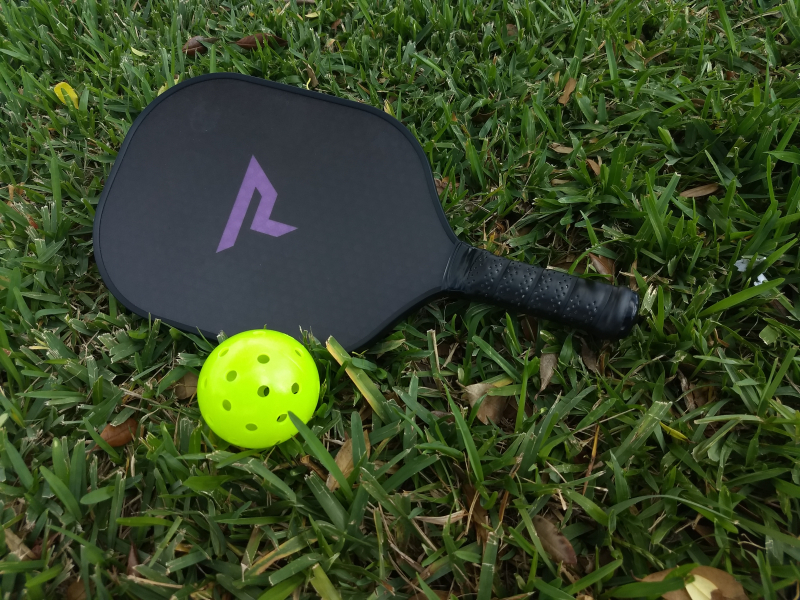 My new pickleball paddle and ball

When I was about 14, I flew on a plane for the first time with a cousin to visit our grandparents in Miami Beach. This was so long ago that if you said “Miami Beach” at that time people knew you were going to the land of shuffle board, shuffled walking, and blue hair, which then meant dyed gray hair not peacock blue as an expression of your personality. There was a lot about that trip that still stands out to me, notably that you can get a sun burn behind your knees making it very painful to sit for hours in a plane, but what one of the elderly twin brothers I met told me still resonates.

“I always thought that when I retire, I would have time to read the books I never had time to read when I was working.” Ten years into his retirement and he still hadn’t made a dent in his reading list. Turns out that if you’re an active, busy person when you’re working, you’ll still be an active, busy person when you retire. Instead of working for the paycheck, he was doing a lot of volunteering.

Which brings me to a recent pickleball game. I got an introduction to the sport when I visited my younger daughter, who plays the game with her boyfriend whenever they can. She even got an athletic (dare I call it tennis?) skirt as a sign of her dedication. I had a free introductory lesson on the roof of a hotel in Las Vegas with my older daughter who told me after the lesson that she doesn’t have the hand-eye coordination for ball sports—who knew? I think she just doesn’t like group sports because when we were at the golf range the ‘expert’ next to us was giving her pointers and encouragement. It could also have been the fact that she was 26 at the time, but still.

I liked the idea that the serve is underhanded because the overhand serve in tennis was always my downfall. Also, the last time I played tennis was almost ten years ago and I hurt my shoulder in yet another attempt to successfully serve the gosh darn ball.

So, I took a class for intermediate beginners the other day. There were four women in the class, the one male instructor, and, for some reason, another older man hanging around. Maybe he is a pickleball pro or instructor in the making? Anyway, once again I found serving a challenge, but one that with practice I am sure I will succeed at. Unlike in tennis when you get two chances to serve, in pickleball it’s one and done and on to the next person, so there’s still serve-pressure.

The lesson went well, I felt that it could be a good sport to add to my retired repertoire because, while my daily swim is great, I’m not meeting people that way, especially if I purposely time my swim for when the pool is empty.

After the class I exchanged numbers with two of the women: one could play during the day and the other after work. The day-player said that she had reserved a court for the next day and that if she finds a fourth player, we could have a game. I should have been wary when she said “game,” as opposed to practice or casual interaction on the court.

The pickleball court was reserved for 90 minutes. It turned out that the day we were to play was the hottest day in a long time and we started at noon. Not an excuse, just a setting of the scene and my mental state as the game progressed.

When the other women each talked about how much tennis they used to play, I got even more anxious. Then, two of the women talked about wanting to practice and improve, so that they could compete. What have I gotten myself into? I thought. During our play, there were intense, as in it really matters, discussions of the rules, of which there seem to be many in pickleball, but, I assume, that is true for many sports, though I never really cared about them because aren’t we here to have fun and who cares if we win or lose the point? I can get competitive, but I don’t like it. Maybe I fear failing, so I give in without pushing myself. And maybe I don’t like comparing myself to others, which seems to be at the heart of competition. Sure, you’re competing against yourself, but that is just part of what playing a game entails.

I’ll admit that we played three games (a game is 11 points in pickleball) and the team I was on lost all three games thanks in large part to my failed serves and no one caring that we’re new at this and let her try again. These women might have said that they wanted the practice, but they also wanted to get back into the spirit of winning.

A problem with pickleball, as I see it, is that you’re supposed to come to the net and play the game there, focusing on your dinking, which is dropping the ball over the net in the kitchen (no volley) area. (Yes, the terminology does indicate a lightness to the game that belies the seriousness with which it is played.) This means that the ball will often be aimed right at you. It seems a particularly aggressive game for one named for a fermented vegetable.

The next day, I had lunch with my mother and some of her friends for our new, monthly lunch. One woman, whose husband recently retired, said that she looked for a card game for him. She said that she thought she found a group for him until the person she spoke to mentioned that the kitty would get up to $50. She realized that it wasn’t for her husband, who was used to playing for pennies. When she said that, I realized that I don’t need to give up on playing this new-for-me game, but that I need to find the right people with whom to play.

I already committed to playing with those women next week. They said that it went well among us, but I think they’ll only say that as long as they still consider themselves at the warming up stage. I’ll try to keep an open mind and focus on improving my game, and see how it goes. Hopefully, the instructor will get back to me to tell me that he has a spot in a lesson before then.