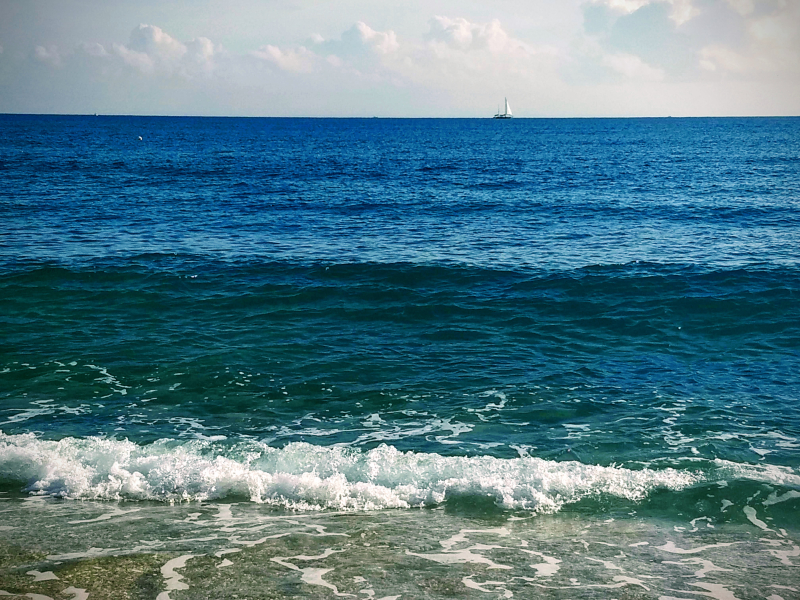 Sailboat off Lake Worth Beach

Recently, I went on two dates with a very nice man who I refer to as the Jewish Doctor. Alas, there will be no third date with said gentleman despite his clear intelligence and interesting stories—two strong positives for me, as well as his sense of enthusiasm for the future. What made me decide against a continuation was my growing discomfort with spending time with someone who has a lot to say, but not a lot to ask. As in, he was very interested in talking about himself, but not so much in finding out about me. On date two, we walked around a park where he seemed to enjoy his talking and my head nodding. When I discerned his lack of curiosity in me and my past, I let myself simply respond to him, which is not where I want to be in a relationship. It is tiring and uninspiring to see that someone sees you merely as a backdrop to himself.

During dinner I learned about his family’s history and dynamics. I also learned more about his desire to sail around the world when he retires in a few years—and his expectations for the “anointed” woman who would join him on his sailing adventures. It was, as older daughter noted, a job interview. But I will not take the job, as tempting as it may seem (and it was tempting), because in all the hours we spent together, he did not seem to care about me except as how I could be of service to him.

As a teacher and, honestly, as an adult, I have learned to ask questions. While I may also interrupt people (I blame teaching, as well as being a New Yorker and Israeli for that), but I am honestly curious about them. I want to know about their experiences and how they responded to them and what they mean to them. Seems like it should be basic: an interaction based on words that creates a new experience.

Towards the end of our dinner at a Greek restaurant, I couldn’t take it anymore, so I asked if he had any questions for me. He answered, “No.” Mind you, by this time in the approximately eight hours we had spent together he did not know where I went to college or what I had studied (we covered his academic career), that I had lived in Israel (we had covered where he had lived and some of his travels), why I became a teacher (yes, I knew why he became a doctor), or even what I write (I had said that I go to a certain coffee shop to write, but there was no follow up question, not a “What do you write?” or a “Have you been published?”). I was stunned by his bluntness—and disregard.

Perhaps he realized that it was not okay to so openly admit his lack of interest in my life, so he asked—a repeat of the question that I had just asked him—what I was looking for in a partner. So, the one question that he asked me was, in reality, about himself and not about me.

Since that date, I have continued swiping left and right on the dating app I have been using. But I am back to thinking that nothing will come of it and that it is probably for the best. I like being a single retired woman.

It’s funny that I should feel that I’m in control of my life now when I live with my mother, watching to see if she needs any help, and that I plan to move to be closer to my daughters, with my mother joining me when she’s ready. I know that I generally try to adjust myself to accommodate others, so perhaps being with a man again would be too much adjusting for me. I fear that I would lose too much of myself that I fought so hard to gain after my marriage and divorce, and two short-lived relationships. For years in my marriage, I would do what I thought was necessary to please my husband—to be a good wife. But I don’t want to go back to shape-shifting to fit someone else. Maybe being married was the anomaly in my life and being alone is the natural state.

Thinking back over the beginning of the pandemic when we were in lockdown, I can’t imagine how hard it would have been if I hadn’t been alone. And, even now, living with my mother, it’s a challenge for me to always be so visible. The constant drag of interacting, of not being able to retreat into myself, is hard. Sometimes I wonder why being in a couple up is the natural order of things. Then I remember that there has been joy with others, whereas alone I only reach contentment.

Perhaps I need to rethink relationship possibilities, where the expectations need to be transformed to fit my changed awareness. As I told the Jewish Doctor, I’m looking for someone with whom I can get out and do things, Over the years of being single, I have discovered that there just might be some things that are better done together. Sure, I have enjoyed wandering around cities and parks on my own, but staying within my thoughts and observations sometimes feels like I am living in a loop rather than being in a dynamic situation. Perhaps I need to maintain my home as my space (mentally and physical) and not even consider sharing it with someone. With this as my baseline decision, perhaps I can imagine a different future. Of course, it still won’t work with someone who sees me as a backdrop.

It seems that I just talked myself into still swiping.