Home Archives Profile Subscribe
Still Alone: Why Change?
Wandering as My State of Being 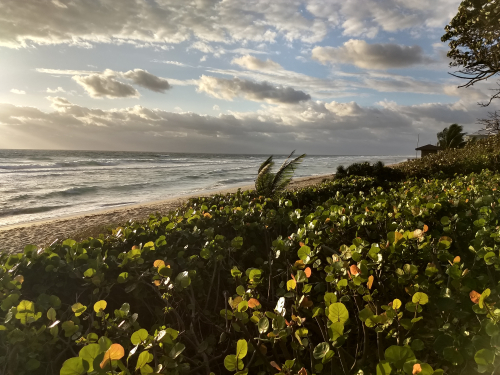 Breakfast View
I’m still troubled by something that younger daughter said to me a few years ago. She told me that I wasn’t adventurous. Mind you, she said this on our trip to New York City where she expected me to decide on all activities and dining establishments, even though I haven’t lived there since 1995, when I was pregnant with her, worked full-time, and was the mother of a preschooler. Still, it has stuck with me in a way that someone else’s truth infringes upon one’s own imaginings.

My immediate reaction was to remind her that I had moved from New York to Israel on my own when I was 21. This, surely, rated as adventurous, I said. She practically yawned when she replied how long ago that was. I could have added that we had moved from Israel to Virginia for my high-tech job, that I went to graduate school in my 40s, changed careers, and divorced her father with a tenacity that surely rated as a different kind of daring, but all she saw was that I was a teacher who taught the same thing year after year. Since then, I think about her blunt assessment when I consider if I am hesitant to do something new because I honestly don’t want to do it, or if the hesitation is in actually doing something new.

Mind you (and I should have thought of this when she made her pronouncement), the degree to which I have been adventurous should be compared to the degree to which I was exposed to that quality in my childhood—of which there was practically none. My parents lived in the apartment they moved to when my mother was pregnant with me until she moved to Florida a few years after my father passed away, which means that she lived there for over 50 years. And even the apartment where I live with her now was a bequest from her aunt. Clearly, I see moving as an indicator of adventure or change.

Since I graduated from college 40 years ago, I’ve had a number of jobs and two careers; I lived in three states, two countries and quite a few homes; and I even got citizenship for another country (Israel). But what she focused on was that I had stayed for a long time in one school and position—and it would have been the same classroom if we hadn’t undergone a renovation. For me, I didn’t see that as being stuck, probably because I never imagined that I would be a teacher, so the career itself—even my daily entry into my classroom—was always a bit of an adventure.

Nevertheless, it’s unsettling to think that I am perceived as lacking in a certain oomph, because that’s not how I perceive myself. It has become important to me, especially since retiring (and I would say that retiring at 60 requires a bit of jumping into the unknown) that I act on my perception of myself as dynamic, and not just think that I am.

Which brings me to dog-watching and dog-sitting, which I did recently. It was completely new for me, entailing trying a new job, entering the gig economy, meeting new people and becoming comfortable in their homes, and testing my identity as a dog person. It also meant that I pushed myself past the parameters of my day that I had quickly gotten used to.

After two jobs in two weeks, I realized that I liked the dog-sitting, which was ostensibly a sleepover with the dogs in their home, but not the dog-walking, where I had to go over to the dog’s house three times a day to walk him and take care of him and his cat sibling. What I didn’t like about that was that I lost my sense of freedom. I had become tied to the clock and an external schedule, making it feel like an imposition—like a job. I quickly changed my profile on the dog-walking app to only show that I dog-sit. The immediate lesson here was that it’s good to try new things, but not to commit to them just because they’re new.

As I sit here writing, I’m watching a woman attempt to hit a golf ball. (The apartment is on a golf course, so during the day I watch golfers swing, golf carts roam, and hear the whack of club on ball.) She is terrible. I will be generous and assume that she’s trying a new sport. Her way of being adventurous, perhaps, as I was in trying pickleball.

I wonder, as I watch the steady stream of golfers on this beautiful winter day, about trying new things. What does it mean to be adventurous to me now? Does it have to be big things, like a new job or home or international travel? Can it be in little things, like new local beaches and restaurants and even recipes. What makes me feel that I’m pushing myself? As a single woman, sometimes just stepping out of the house feels like embarking on a grand adventure, since there’s no one to rely on or with whom to share the experience.

It finally occurs to me that what matters is that I am comfortable with myself, that I believe in myself as an entire world. I don’t need to get lost in a foreign city or figure out new colleagues and neighbors to feel alive. Just because I’m still doesn’t mean that I need to overturn things to know that I’m not settling into dullness. I see now, for who I am now, that to be with wonder and anticipation, to know that each moment is never the same, is to be adventurous. 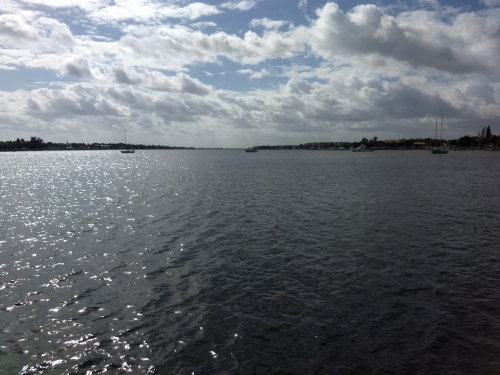 Wise words: "It finally occurs to me that what matters is that I am comfortable with myself, that I believe in myself as an entire world. "

I also think it's interesting to think about the reasons people (like your daughter, or anyone in our lives) make declarations like "You're not adventurous." I think it often has to do with a narrative they want to follow about themselves or the world, what they are going through at that time, etc. In other words, it may not be based in any objective "truth" about who you are or the traits you exhibit!

Also, as someone who knows what being a high school English teacher is like, I can assure anyone out there that one must be truly adventurous to tackle those challenges day in day out :)

Thanks, Jenny. Good point. It does make sense that it is also her looking for guidance about how to proceed with her own life. But she certainly got me thinking!

I'm glad to be a retired English teacher, but I'm so proud that I lasted as long as I did in the classroom, hopefully motivating some adventurous minds!