Fate or Meeting a Long-Lost Friend in the Holocaust Museum 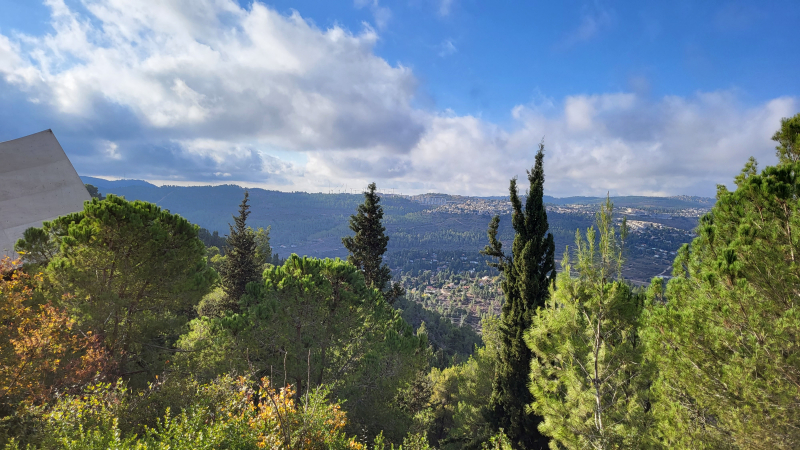 View from the grounds of Yad Vashem (author's pic)

I met my ex-husband waiting for a bus at Haifa’s central station. I was by myself because the person I went into Haifa with wanted to stay and shop, while I wanted to get back to the kibbutz where I was living to start getting ready to fly to England in two days. We briefly chatted while waiting for the bus to Tiberias, then, once the bus came and I sat down, he slowly walked down the aisle and sat next to me. We talked, somehow; I had enough Hebrew and he had enough English to hold a conversation. He visited me the next day and we exchanged addresses. Over the next six months we corresponded and when I made aliya (moved to Israel), we met again, beginning our very romantic romance that didn’t end romantically.

Shortly after my family and I moved to Virginia, knowing no one, I took my daughters to a children’s festival. I was alone with them since my husband, who wouldn’t have wanted to go there and would have suggested something else, had briefly returned to Israel to deal with his green card. After sitting down, I looked behind me to see how full the auditorium was, and, there, a few rows behind us was a friend who I had lost touch with when I went away to college. Our friendship was a foundation upon which my life in Virginia depended.

The latest fateful encounter was a few days ago in Jerusalem. Some people have religious revelations there; I had a supremely human one.

In the midst of the emotional experience that is Yad Vashem, Israel’s Holocaust Museum, I saw a friend from New York who I hadn’t seen in over 10 years. I was watching a short video on the experiences of Bulgarian Jews during the Holocaust, a special interest since I’m translating and condensing survivors’ stories from there for the US Holocaust Memorial Museum. As I watched, I noticed a woman to my left who was also watching the movie. She seemed familiar, but I couldn’t place her. I stepped back as if to turn away. Then I thought that I can’t walk away just because I couldn’t remember her name.

I turned to her and said, “I know you. I’m Laura.” She looked at me with eyes full of the sadness that weighs on you in that museum. Then they widened into excitement, and said, “I’m G.” And in that moment, we remembered each other. We hugged with all the emotion that bears down on you there, but also from the deep well of disappointment that had been our lives when we had last been in touch, each dealing with our turbulent divorces from our husbands.

How to explain how unexpected this encounter was? Neither of us lives in Jerusalem, or even Israel for that matter. Both of us on vacation, in a large, busy museum with our minds engrossed. It is not a people-watching place. An unexplainable meeting. Fate.

It turns out that she was showing Israel to her second husband and the next week they would visit her daughter (who had been a childhood friend of older daughter’s) who now lives in Tel Aviv. They visited the museum the previous day, but hadn’t finished, so they came back and started where they had gotten up to when the museum closed. I thought that I wouldn’t get in since they said that there were no entry tickets.

Once in, though, if either of us had gone at a different pace or turned to look at something else, there would not have been that moment of recognition.

We hugged and cried, loudly. (I wonder what the people who saw us thought had brought us to that emotional state at that spot.)

We talked for a few minutes, it was hard to stop, but there was still so much more of the museum to experience. We arranged to meet later that day at her hotel, which was a few minutes from mine. As I continued, my thoughts were full of excitement and surprise at our meeting, reconnecting.

Fate? Something brought us together. Made those other chance encounters happen too. Not many over a lifetime, but they had been significant, had brought so much to my life. Those people at those moments. Me at those moments.

What is it that we want from friendships, relationships? To feel heard and be asked to listen. To be encouraged and give support.

I was in Jerusalem for three days and it was fascinating. But I was not moved. I did not experience a connection to God, or the force that is.

I reconnected with a friend.

It makes me wonder if friendships are part of the essence that is. Part of the fiber that connects all living things. The people, who may be briefly in our lives or present for much of it, bring us deeper into ourselves. They accompany us as we—timidly, irreverently, thoughtfully, naively, trustingly—trod our path. Perhaps what connects us—that otherworldly thread—is that we each need something outside of the self to help us fully become ourselves, to experience and appreciate our lives and who we are, in all that is.

Back in Israel: A Tourist in a Place that Had Been Home 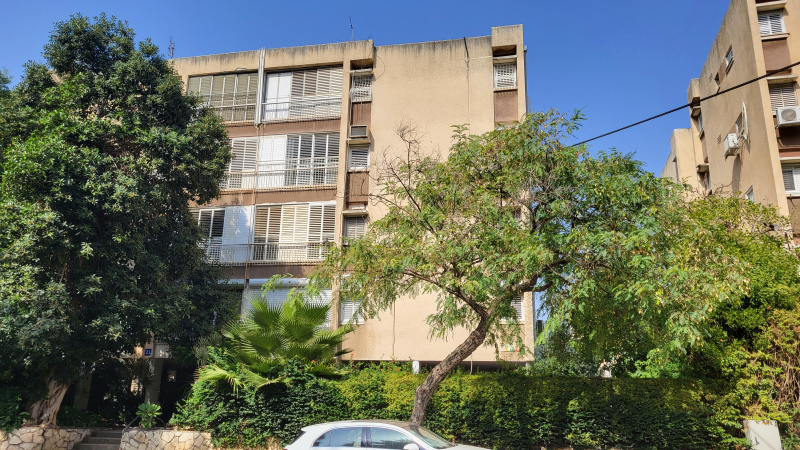 Where we used to live in Tel Aviv

I’m in Israel visiting for a month after not having been here for more than 22 years. Much is different; much is the same. For Israel; for me.

When I left in the summer of 2000, I lived here with my family, my husband and I were about to celebrate our 15th wedding anniversary in the dream home we recently purchased, one daughter was going into 4th grade and her sister into kindergarten, and I worked in the high-tech industry. Now, I live in southern Florida with my mother (after leaving Northern Virginia where we moved that summer for what was supposed to be a temporary stay), I’ve been divorced for many years, my daughters have both graduated college, and I retired from teaching (a career I hadn’t even envisioned in 2000). Twenty-two years of living, but always wistfully thinking that I should be in Israel.

This trip represents action—finally back—and a moment to pause before moving forward, unstuck. It’s time to accept, I see now, who I am and where I am. I need to acknowledge that the past is different from what I thought it would be. How many of us are living the lives we had imagined when we were 20?

Looking forward, I need to think about what I need to do so that this moment becomes a stepping stone for what will be, rather than a memorial keeping me stuck contemplating what was not.

From 0 to 20 in New York, 20 to 40 in Israel, 40 to 60 in Virginia. Maybe the moves and the timings were right. There was enough time in each place to adapt and feel at home, as least as much as possible when I live so much in my own (internal and external) space.

On this trip (because that is what it is), I see that I have always been a woman who spends much of her time wandering around by herself, people-watching, contemplating, being in motion and still at the same moment. I feared encountering this aloneness (one reason why it took so long for me to come back). But that’s okay, I realize; it’s my core.

But I’m not always alone here. I have come to meet people I volunteer with long-distance and to finally see the two institutions I’ve spent hours helping raise funds for, so that they can continue the important work they do in bringing people together, providing an education, showing that equality and mutual respect are not just for other people in other places. I am necessary. I have purpose. I may be a wanderer, but I’m also a giver. That balance maintains me, wherever my home may be.

Israel is busier, more crowded, more built-up, than when I was last here. But still, the characters and the character, the sounds and the Shabbat silence, the foods and the interactions, remind me of why I moved here so many years ago. To be Jewish in Israel is a somber and satisfying fulfillment of identity and history. It is to feel connected from the root.

The Hebrew that took years to learn looks and sounds wonderful: I read signs and advertisements, listen to the news (oh, the news ☹), and I can still eavesdrop (this was my first indication that I had learned enough Hebrew to integrate into society), and ask for help, and hold conversations. To see people dressed like me, the many secular Israelis, and the religious Jews, with their head coverings and clothing styles signaling their belief systems, is comforting. It is to re-immerse into a world that feels so comfortable, even though it has been so long. At home, but not home is still a satisfying to experience.

Being confronted with my past in such a physical way makes me realize that life is not about the choices we make, but how we live from them. My actions and inactions have led me to a fulfilling life, with people who I love and who love me. Not an outcome to regret, but one to celebrate.

Going forward, perhaps I can incorporate more frequent visits here so that my past, my present, and my future blend together. 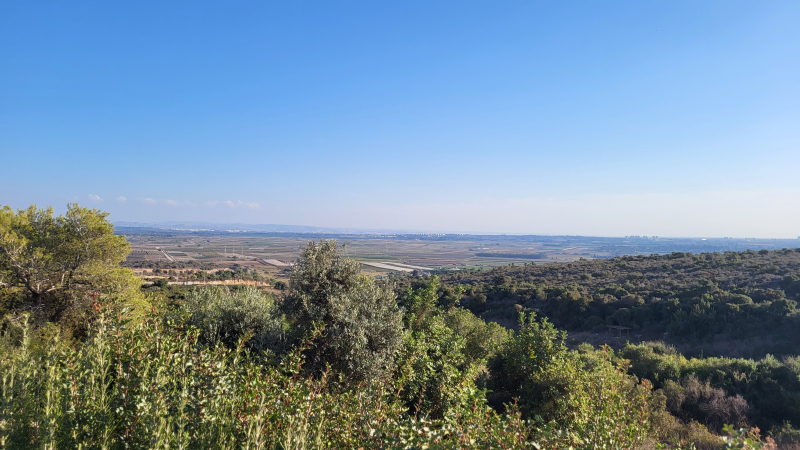 My view now in Zichron Ya'acov