My latest piece, The Retirement to Florida Cycle, has just been published at the Times of Israel.

I'm excited to announce that I now have a blog at the Times of Israel. Some of my writing will be posted there (depending on the topic), rather than here. When that happens, I will post a link here.

Here's my first link, to my post, "Learning Not to Be Judgmental to Save the World." I hope you continue enjoying my writing.

Being in Israel after 22 Years: A Reaffirming and Inspiring Journey

When I arrived in Israel in mid-October, I took the train north from the airport outside of Tel Aviv to Binyamina, the stop nearest where I would be staying. In the hour ride, I looked around the crowded train at the people working on their laptops, talking to each other or on their phones, gazing out the window, sleeping—people in the interim stage that is travel. Out the window I saw office buildings, strip malls, industrial areas, greenhouses, farms, neighborhoods of private homes and apartment buildings—and I thought to myself that the antisemites and anti-Zionists who want to destroy Israel don’t seem to grasp—care—that this is a real country, with millions of people living their lives. This is not a political statement; this is life. This is not merely a decision written on a piece of paper or a vote in the UN. This is not a military base. This is home to generations of Jews who are simply living their lives, as they have done since ancient times.

Israel has a robust infrastructure—one that is continually being developed, as evidenced by that train itself which didn’t exist when I flew out in 2000, and the light rail I took in Jerusalem, and the light rail being built in Tel Aviv, which made the traffic there even worse. This is not a temporary spot to move from. This is the place Jews have prayed to return to. This is home.

This should be the place to feel at peace, as when you get home after a long trip. After more than two millennia of being chased out of towns for trying to make a living in the only ways permitted, or being forcibly converted because we’re still waiting for the Messiah, or being burned for praying differently, this settling in should be lauded. Our ancestors were not all killed. They did not all give up. They did not fully concede to the majority religion wherever it was that they lived at that time. Seems to me that perseverance and dedication are behaviors we generally value and admire.

That the people who proclaim that no Jews should live in Israel are accepted astounds me. That the people who want to deny Israel’s right to exist—Israelis right to live in their country—that they want to give one group rights and then deprive those same rights of another group (not just of a homeland, but of life itself)—seems to be the definition of inhumanity and hypocrisy. In the twisted way the world and the mind work, they are seen as being on the side of freedom. Dangerous hypocrisy.

The absurdity in rising antisemitism, the throwing of the Jews—who are just people like all people, trying to live their lives—once again under the scapegoat bus of a world full of people who find it easier to hate and blame than to consider the challenges of someone else’s life situation, challenges my (natural) inclination to believe that people are basically good. This is a stark testament to the fact that this is not a time of enlightenment, as we had hoped. No, it is a time, just like any other, where there are advances and setbacks, a constant struggle. We are not better because we have indoor plumbing and vaccines. People are still people. But why does poor treatment of Jews always have to be a sign?

My month in Israel, with more trips on trains and buses, miles of walking along bustling streets, and people-watching as I sat at cafes, was inspiring. I remembered anew why I had moved there after college and why I had stayed for almost 20 years. To feel an intrinsic bond with the people around you is not something to take lightly. To see jelly donuts in bakeries as a sign that Hannukah is coming (yeah, this celebration of oil!), as opposed to the barrage of Christmas merchandise and programming meant that I didn’t feel excluded, that I belonged. Jewish people feeling safe in their own homeland should be the goal, not something to conspire against. Jewish people feeling safe wherever they live or travel shouldn’t be a goal, but the norm.

I wish that “people are people” wasn’t my sour understanding that people can be horrible to each other, to Jews, as they have been over the centuries. No, I wish I could interpret it to mean that notwithstanding our differences, we focus on the commonalities and that leads to curiosity and acceptance.

A commuter in Israel should not be a terrorist’s objective. It should be what it is, a person going to work or school, supporting their family, sharing ideas, overcoming challenges, helping those who need it. People living lives. Such a basic concept. 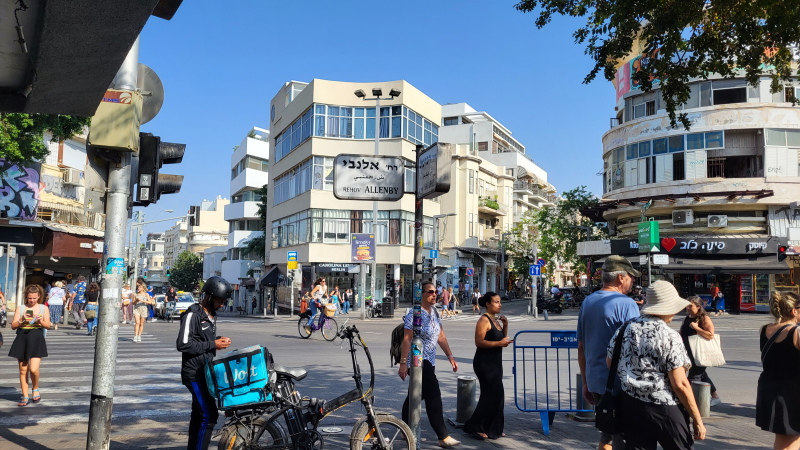