Isolation Is Not So Alone 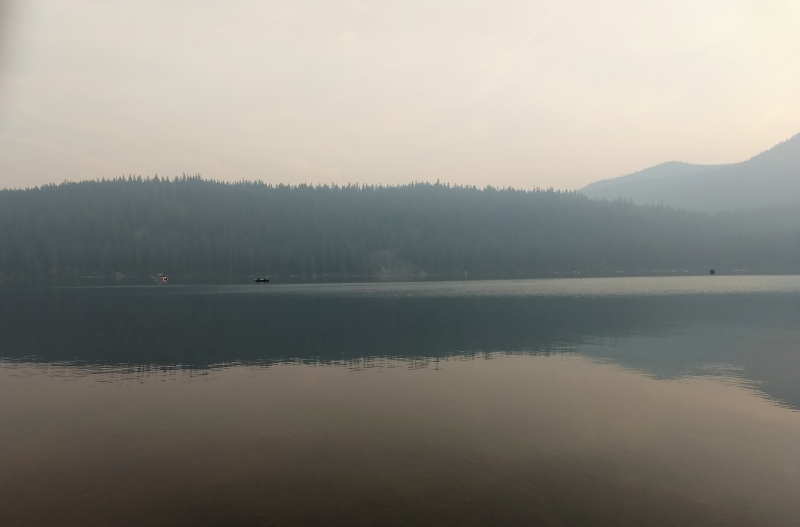 It is now Tuesday morning. Since last Wednesday afternoon, I have been living in a cabin in a rustic lake-side resort in a national forest in Oregon. This is where younger daughter and her boyfriend live and work. I’m here dog sitting while they’re on a two-week vacation in Hawaii with his parents. There are guests and other employees around, but I’m not here to engage, I’m here to completely disengage. I now see the impossibility of that.

Since I retired in June, I have been living with my mother in her one-bedroom apartment in Florida. That was quite the change after having been an empty nester for eight years in my own two-bedroom apartment in Northern Virginia after younger daughter went off to college and, like her older sister, only came back for the occasional visit. The transition seemed easy for my mother; after all, I did go to help her out and make her feel less alone after having been a widow for over ten years. I have found it challenging. I haven’t lived with a parent since I was 17—I’ve been the parent for 30 years!—so being watched over by my 87-year-old mother was jarring. Living with anyone after being alone for so long was going to be difficult for me; I didn’t think that I would ever live with anyone again. Which means that I really did look forward to this retreat in the woods.

A mental and physical retreat. A writer’s retreat.

I was going to focus on learning to be okay with myself as a retired person, not feeling that I should be filling my time with activities and interactions, and some kind of work. I was going to settle into my own rhythm, with four daily dog walks mixed in. Walks in a forest and along a lake surely fit into any type of retreat. What’s more, I had decided that I would use this time to see if I was a writer, where the only way to pass the test would be to work on a book and, in my brazenly optimistic moments, write a draft!

Then Rosh Hashanah and Yom Kippur came, and with them the time to think. My religious practice is certainly not strict, but for a while now I haven’t worked on Shabbat (Saturday) and important holidays. The day of rest: a day when I don’t write or work. I also try not to shop, wanting to have a day when I am satisfied with myself and the current contents of my life. A day when I don’t critique myself and, when I was teaching, I didn’t critique my students either by grading their papers. It is a day when I don’t write, which inherently involves criticism. A day when I don’t think about the productive thing I should be doing. This has helped me perceive myself as a person, not just as a producer of something of “value” outside of myself. There is value sitting in the moment, as I have learned, not just on Shabbat.

My retreat was supposed to be a time to see how stripped down I could get into myself. No people around to interact with and no distractions. Just get my essential story inked on the page.

But this cabin is not minimalistic and, it seems, neither am I. There are meals to think about and being almost an hour to the nearest supermarket makes that a more thoughtful task than usual. There are my mother’s constant update emails and calls (even if the connection is so bad that we only hear half of what the other person says). There are emails and calls from friends and my daughters that mark my days—and are the only things on my calendar. These have made me realize that I am not a person who fully lives within herself—needs to retreat in, as I thought I did. Rather, this retreat has made me realize that solitude is a chapter, not an entire book. My life is enriched with connections, they don’t detract from contemplation-time. After each conversation or email, I realized that there were more things to think about. These are added dimensions—the interweaving of lives through shared stories, perceptions, concerns—not detractors.

I had the entire pandemic to realize this, but it has really come home here in the woods where the solitude that I thought I craved in its totality is neither what I need or want.

If I value others for their presence, their essence, then I, too, am valued for those same aspects of self. I don’t have to produce something to be valued as a person—to value myself as a person. But these friends do have expectations of me, born of my own expressions over time and their perceptions. They expect me to fulfill my desires for myself, even if those desires change. They will not let me cede my passions and skills.

And now it is time for walk two of the day. The dogs are restless, as am I. It is time to get back to the freshness of mountain air and to moving my body that is tired from sitting on this wooden bench facing my laptop. It is time to move and observe, alone. An aspect of my day, myself, my needs. An aspect that I can share later, in some way.

Back to Blogging: Writing, Thinking, Sharing 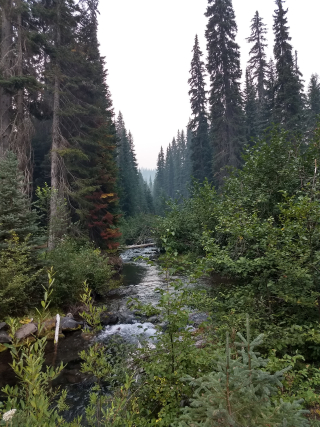 When I started this blog in 2008, I had just finished going through a contentious divorce from a verbally and emotionally abusive man, but I was still living with him—and the abuse—in the same house with our two daughters. (Note the date and the correlation to the tanked economy and real estate market—it would take another year to sell the house and finally feel divorced.) I can remember writing posts as he was banging on the door of the guest bedroom, yelling at me, my daughters angry at me for not quieting him. It was scary and intimidating. I would huddle over my laptop, feeling less alone in the writing and the posting, even with tears dripping down my face. The writing enabled me to focus on thinking and analyzing me, him, our daughters, the situation; it kept me detached enough to not crumble continually—only some moments, every day. Friends would tell me that they would read the blog to see how I was doing. Readers would comment, letting me know that I was not alone. I would feel strengthened by the connection that writing and sharing made—it was the most secular and heartfelt of prayers.

It took years to get through that experience with my dignity and a shred of humor intact.

At some point, my posts transitioned from internal pain to observing that the world outside of me does, indeed, still exist. It was fun to write and see where my thoughts went, rather than being held within the grip of needing to write as a cathartic experience. I started to write with less pain and more joy. I could write about the comedy of online dating (it may be funny after a failed date, but it was rarely funny during one) and the frustrations of teaching. I shed my main identity as an abused woman, as a divorced woman, and was able to write about life. Yes, the deep meaning of it all, well, as deep as I go. I came to see myself as an essayist, and that did bring me some satisfaction.

While I have always been anonymous on the blog, it is hard to strip all connections, especially if you link to it on other apps in order for people to find it and read what I have to say. Over time, a few students and parents found the blog. Parents complained to administration. I’m not quite sure what there was to complain about; after all, at the first “sighting” of the blog, I deleted the post about having divorce sex. Funny, parents complaining about an English teacher writing. Well, not so funny when you realize that they expect you to be fully committed to their children, more than them it felt like sometimes. I can say that now that I'm retired! And some students, well, they seemed to think that they had one up on me by letting me know that they found it. It’s not as if I was hiding my thoughts in a drawer, but it was uncomfortable.

In the beginning of the 2019-2020 school year, a parent spoke to my assistant principal who let me know that it would be wise to hide the blog from the public. For the first time a student commented on the blog, rather than just looking around silently and making a comment to me. This time I felt violated. So, I took the blog offline, until right before I retired in June. In that time, though, I also stopped writing. I wrote a few poems at the beginning of the pandemic, but I just wasn’t sure of myself as a writer, what I wanted to express and if I wanted to express myself in words.

I focused on retiring after 16 years of teaching and wondering what I would do after. I’m only 60 (wow, using “only” with that number), so I'm not retiring from the world, just a job that got increasingly difficult and unsatisfying, and at the minimum age to get a partial pension. There are things that I enjoy doing (especially baking and cooking in concert with eating), and while I might do something with that (I do make excellent veggie spreads!), I have felt a bit lost without writing. It really is true for me that I don’t explore my thoughts without writing. And now that I don’t have classes to teach, and students and colleagues to talk to, it seems that my mind is fluttering about. It needs to land occasionally.

At first, I thought I would write a book. But whenever I start writing a book, I don’t get anything done. (I will add in my defense that I have written a few books in the past, but the process was always an unsatisfying battle.) Each day I would rewrite what I wrote the day before, filling my “notes” document, but not my Chapter 1 document. When it comes to writing these shorter posts, personal essays, I get right to it. One sitting, one post. My body and mind sync with that. Why fight who I am and what I do best? Doesn’t being 60 and retired mean that I need to be honest with myself about my abilities, and my strengths and weaknesses. My truths! So, here I am, back here.

This blog has been home to me for longer than any physical home since I went off to college at 17. I still feel that I am a rebellious woman expressing my thoughts. I hope you will join me in this continuation of my/our journey and subscribe (Yeah! I figured out how to do that now that the app I used before is no longer supported), and even comment. I look forward to continue meeting here into the future.